Why you might want to try a CBD balm

Based in Edinburgh, Hemp Leith is an online shop with a local focus. Our shop contains a range of CBD oils, a CBD E-liquid as well as our 250mg CBD balm, packed full nutritious and healthy ingredients.

Although we can’t make any claims as to the benefits of CBD as a topical treatment, except to say that it promotes health and well-being, we can encourage readers to do their own research and discover what CBD can do for you.
So what does our CBD balm contain?

Of the more than 100 chemical compounds found in the cannabis plant, CBD (cannabidiol) is one of the most prevalent. Due to the growing research around the positive benefits of CBD on health and well-being, CBD is becoming increasingly sought after, especially when taken as a full spectrum plant extract, making use of the other compounds, producing what is known as ‘the Entourage Effect’. It’s important to recognise that CBD and THC are not the same thing, CBD is non psychoactive (it won’t get you high) and in our case is extracted from strains of cannabis that have little or no THC content.
Our CBD is legal and safe as well as organic, free from pesticides, herbicides, metals and THC free. Read more about our CBD here.

Coconut oil is a kind of fat that has become popular due to its health benefits. Not only in reducing abdominal obesity (1) but also, the fatty acids or MCTs (medium-chain triglycerides) may improve cognition in individuals with Alzheimer’s disease (2).MCTs in coconut oil have been found to fight bacteria and fungi, (3, 4, 5) and as many skin conditions, such as acne, have a bacterial component (6) coconut oil may have a beneficial effect in treating or preventing conditions caused by harmful microbes.

Coconut oil is comprised of 7 kinds of fatty acids. Caproic, lauric, capric, myristic, stearic and palmitic acid. Lauric acids accounts for about half of all fatty acids in coconut oil (7)

This is important to note as lauric acid has been found to be a powerful antimicrobial agent, as microbes are the cause of conditions such as acne, cellulitis, athlete’s foot and folliculitis coconut oil may then be a powerful treatment or prevention. Studies have evidenced that lauric acid was found to be the most inhibitory against microbes when compared against 30 other fatty acids (8).

Propionibacterium acnes (P. acnes), is a bacterium that promotes inflammatory acne. A study of three fatty acids (lauric acid, palmitic acid and oleic acid) found that lauric acid had the strongest anti-bacterial efficacy (9). Furthermore, in addition to lauric acid,  the capric acid found in coconut oil has also been found to have anti-bacterial properties (10).

Additionally, as inflammation has been found to be such a core feature of acne (11),
coconut oil offers a two pronged approach in not only inhibiting the bacteria that causes acne but also acting as a powerful anti-inflammatory in conditions such as P. acnes.
Coconut oil was found to be anti-inflammatory, pain relieving and fever reducing (12)  in a study conducted on rats. As inflammation is a major factor in a variety of skin conditions such as acne, psoriasis and contact dermatitis, coconut oil containing products warrant consideration as a possible treatment.

Coconut oil is an antioxidant

Virgin coconut oil was found to be a more potent antioxidant compared to copra oil, olive oil, and sunflower oil in a comparative dietary study on rats (13). As antioxidants can act to modulate inflammation (14), coconut oil, then, may be useful in treating inflammatory conditions such as acne, psoriasis and contact dermatitis.

Coconut oil is a great moisturiser

Coconut oil has also been found to be an effective moisturiser. Conditions characterised by dry, rough, scaly and skin such as xerosis have found coconut oil to be a therapeutic, safe moisturiser and just as effective as mineral oil (15).
Similarly, coconut oil was found to be effective a treatment for eczema (16) and in another studies found coconut oil to be a superior topical treatment for mild to moderate eczema than mineral oil, showing a 68.2% decrease in severity and extent compared to 38.13% in mineral oil (17).
Additionally, moisturised and well hydrated skin is effective for a range of dermatological issues such as  acne vulgaris, scarring, rosacea, retinoid-induced irritant dermatitis, atopic dermatitis, psoriasis, and the skin dryness that appears to occur with intrinsic and extrinsic aging (18, 19).
Finally, coconut oil may speed up wound healing. This study (20) found coconut oil to heal wounds much faster in rats, due to increased production of collagen and the antioxidant properties found in coconut oil.

Shea butter is the fat extracted from the nuts of African Shea trees, predominantly found in West Africa. Used as cooking fat and as a substitute for cocoa butter in the chocolate industry, shea butter is also a great topical treatment possessing sun screening properties as well as hydrating, softening and smoothing the skin.

Shea butter is anti-oxidant and anti-aging

Shea butter has also been found to be anti-aging and an anti-inflammatory on the skin (21).
As antioxidant are related to the prevention of skin aging (22), shea butter’s anti-aging properties may be due to it being a powerful antioxidant resulting from its high Vitamin E/Vitamin A content, both known antioxidants (23, 24).

Shea butter is good for arthritis and muscle swelling

Beeswax may be effective in various skin conditions
Much research on beeswax is in its early stages and is yet to be borne out. However, there are studies that indicate the use of beeswax in conjunction with other topical agents to treat conditions such as diaper dermatitis (28) as well as beeswax as an antifungal agent in treating skin infections caused by pityriasis versicolor (29). Beeswax used with olive oil has also been studied as a treatment for atoptic dermatitis and psoriasis (30).

In sum, the range of ingredients in our 250mg CBD balm has a lot to offer despite the fact we can’t discuss the benefits of CBD. Visit our shop and take a look at our balm as well as our range of other CBD products. 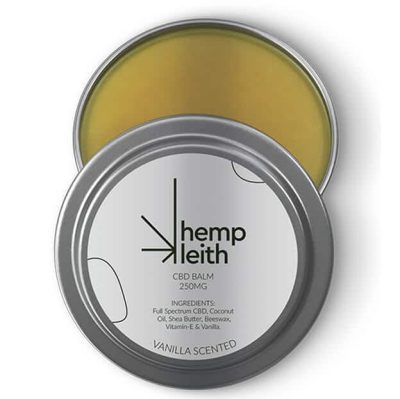 Site design and creation by